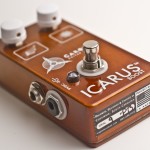 A very interesting array of superb individuals have given us some great feedback on our Icarus booster lately. These are players across different genres with very different styles, so we take their praise very seriously as evidence of the versatility of this simple and useful sonic tool.

Check out what Phil Bradbury from Little Walter Tube Amps, Chuck Sligh from Tunguska, Zach Morrison from Say Brother, and Aaron Graves from Those Lavender Whales told us about the Icarus recently.

Phil Bradbury is company founder and amplifier maker to the stars (Vince Gill, Brent Mason, Dan Huff, Reggie Young) at Little Walter Tube Amps. He KNOWS tone. So when we read the following from him, we were pumped. “I went straight to my demo room and tried it with my 50, 15, and 5 watt amps.Â  With my 50 watt I ran it at about 50% boost and 90% tone and it was perfect for kicking the lead up a notch. It took my 15 watt to AC/DC land and I believe it was made for my 5 watt.Â  You have done well. I would really hit the low wattage amp owners with this new product as it gives them the big amp feel at manageable volumes, and this pedal can breathe new life into the old work horse.” 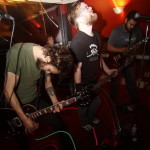 At first glance, Chuck Sligh and his ultra-heavy band Tunguska couldn’t be sonically further from Phil’s clients, but they share the same passion for tone and the pursuit of tools that work for them. Interestingly enough, along with Phil, Chuck was one of the first people to encourage/demand/strongarm us into developing a clean booster. In his words: “I am not too versed in the abstract terminology that is inherent in most guitar gear reviews. As a player of heavier music, I have always been more then a little underwhelmed by most of the more common dirt/distortion boxes that I have come across. With the music that I am playing now I wanted essentially a clean setup with a couple of grit variances that I could engage and disengage through a base clean and dynamic, but loud tone. Most overdrives that I tried provided an acceptable amount of drive, but too much compression. The Icarus Boost makes a perfect first string drive that gives me the boost and dirt that I was looking for and keeps the dynamics of my guitar to amp setup perfectly. The “Sun” knob gives me an incredibly varied tonal sweep that completely dials out all of the less desirable harshness of the other overdrives that I owned. It can be as aggressive, cutting, and dynamic as I need it, and being a right hand heavy player, cleans up effortlessly with pick control. With harder picking the pedal never gets brash, and every string cuts equally through perfectly. Bottom line, the Icarus Boost was exactly what I was looking for in a dynamic, drivey boost. Kudos Caroline, kudos.”

In the past, I’ve described Say Brother as a group of five guys hit by a time-travel-tornado during their set as an opener for a CCR & Foghat double bill only to be dropped into modern times. Cutting and punctuating the soulful, rambling racket is the lead guitar playing of Zach Morrison, who first told us that he couldn’t put it the feeling of using the Icarus into words very well, then he described it as this “perfectly punchy, thick sounding force that puts this powerful feeling right in my belly when I kick it on.” Zach apparently was being humble about his gifts as a wordsmith!

But the winner of the Al Leong (look him up) Award for Spartan use of the English Language for a Product Testimonial must go to Aaron Graves, from Say Brother’s Fork And Spoon Records labelmates in Those Lavender Whales. When he came by to pick up the Icarus after trying one out, he put it simply: “It makes things bigger without making them stupid.”