What kind of transistor is Icarus based around? (germanium, MOSFET, etc.) And does it invert phase?

Regarding the transistor: the Icarus is op-amp based, much like our Wave Cannon, so it is neither of those specifically mentioned. We believe the most important things, way more important than any specific components used, are the design of the circuit and the sound it creates. We think Icarus is a winner on both of these fronts; it is well put together, clean, warm, and rich sounding.

We do think there are some genuine misconceptions regarding these kinds of analog designs. When we were developing Icarus, we would sometimes hear people mention that they “don’t like op-amps, I only prefer boosters that have transistors.” This the image on a schematic for a bipolar transistor:

And this is a schematic for the inner workings of an operational amplifier: 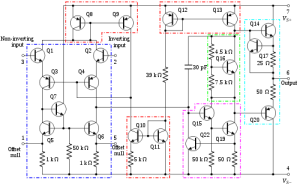 Hmm. I see transistors. Lots of them, in fact! So when I hear somebody say “I only like boosters or buffers that use transistors” it sounds like somebody telling me “I don’t believe a car could have that much horsepower because I don’t see any horses inside of it.” Well, it could be worse – they could have a thing for Colonel Belmont’s Horse Glue when they have to repair a fridge magnet or put together a pop-sickle stick house.

The phase issue can be a more serious matter. As pedal boards and multiple stereo or parallel amplifier setups become more elaborate and commonplace, a boost pedal that inverts or flips the signal when activated can actually create a perceived DROP in volume, due to phase cancellation.

We could go on and on about why we think this could be important, but it was important to us that the Icarus did not invert the signal. Here’s the proof, courtesy of the scope. The smaller waves are a capture of the input guitar signal, and bigger waves are the Icarus (obviously). 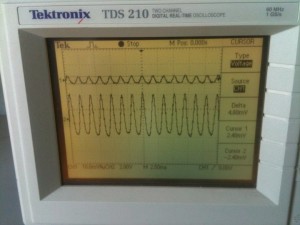 So I hope this answers those questions. I do have to go, I think I’d like to go see the new Muppets movie and enjoy the rest of my vacation. – Philippe