Full disclosure: I used to think nicer/fancier cables were total snake oil, horsefeathers, marketing nonsense. I was content with the $18 patch cable that I’d used since the late 1990s, taking pride in its fraying ends and the collection of venue waste and filth that had stuck to it like gum to a shoe. I’d bought pricier cables from a big chain and after they failed (and damaged a couple input jacks along the way in their short tenure) I all but declared anything but spending couch cushion coin on cables to be  total nonsense.

Then I met the guys from Sinasoid.

In addition to being total super people (who bravely accompanied my mom at a NAMM party to help her get smokes in a rough part of town, true story) Andy Kim & company know their stuff. And when I first tried one of their cables, I thought “what is this alchemy?” It did not compute. Everything felt and sounded stronger, clearer, and more immediate. I didn’t WANT to believe it. It flew in the face of the science that I held so closely and dearly. Stuff sounded seriously, seriously dope. And it just relentlessly worked well. 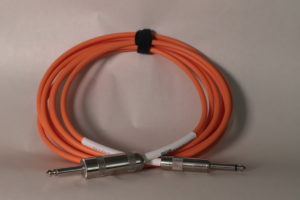 So in that spirit, here’s a limited collaboration we’re running. We commissioned these 12′ cables with orange Canare wire and white sleeves. They look fantastic, like Tampa Bay Bucs 70s jerseys, X-wing pilot flight suits, or creamsicles. They have Switchcraft 181 silent plugs for the instrument side that work well and look like old school 20th Century industrial awesomeness. If you have a strat or a tele, you might look at the plate and wonder “will it fit?” (TWSS alert!) And 12′ is a really nice length: long enough to move around on stage without fear of dragging your pedalboard, but not so long as to get tangled underfoot. Win-win.

So, nicer/fancier cables might not be for you. We understand if that’s the case. But if you are game for this kind of radness, we think this is worth your coin.