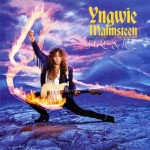 And no, it’s not the same seven words repeated very quickly over and over! Earlier this week, I posted a link on Twitter and Facebook to what I considered the greatest interview of a guitar player ever published: the August 1994 Guitar World blindfold test of Yngwie J. Malmsteen. (If you haven’t read this yet, go here and be prepared to either (a) laugh until your face hurts, or (b) curse Yngwie for daring to insult your favorite guitar hero.)

After one of my longtime friends posted his take on the matter, I promised I would share mine. So get comfy. As promised, an extensive defense of Yngwie J. Malmsteen, after the jump.

Like most of us, I learned guitar at my local shop. In the late 1980s, I took lessons at Frets & Strings off of Inwood Road in Dallas, Texas. I wish I could say that most of my learning came from formal training. My teacher, Jerry Branch, was as patient as you could expect from someone who later went on to teach music therapy at a prison. I’m certain his degree in jazz guitar at North Texas State proved absolutely necessary for figuring out the guitar solos on Great White’s â€œLady Red Lightâ€ or â€œCaught Somewhere in Timeâ€ by Iron Maiden.

Really, much of what I learned came from the guys who manned the shop floor. Steve had long hair with bangs, played in a band called Dark Alliance, and wrote songs called â€œDungeons and Dragons” with guitar solos in E flat minor. Those of us who geek out on gear will know exactly how he sounded and played after reading the following list: smiley faced graphic EQ curve, Dunlop Jazz IIIs, Floyd Rose, EMG-81. Brent’s claim to god-like status was from having a seemingly endless supply of attractive female students and his former ownership of one of Eric Johnson’s Fender Twin amplifiers. In between trying to halfheartedly sell us various brands of gear that were beneath what they chose to use for themselves, most of what these guys did during the workday consisted of sitting behind the sales counter, playing their most jaw dropping licks at us high school kids, and holding court on their favorite subjects of ill-repute.

Namely, the ineptitude of other guitar players.

No guitar player of the late 1980s was safe. Kirk Hammett might have helped Metallica go 10x platinum, but in that shop, he was â€œa guy who has managed to play along with the chords exactly one time in his career, on â€˜Dyers Eve‘, and it was probably by accident.â€ Robert Cray’s â€œsolo in â€˜Smoking Gun‘ sounds like somebody recorded a beginner’s first lesson with the blues scale.â€ Vernon Reid â€œis a decent RHYTHM guitar player, I guess – too bad they couldn’t hire somebody for the leads.â€ Joe Satriani â€œsounded like bad local sports highlights.â€ Even Eddie Van Halen was â€œstarting to sound like Alex Lifeson.â€ And Alex Lifeson â€œsucksâ€.

The same critical vitriol could be extended to young guitar players by association when they attempted to try out some gear and dare to show off their chops. Playing a diminished chord arpeggio? â€œOh boy. George Lynch is here!â€ Jamming out a hard rock riff with both major and minor thirds? â€œI think somebody is practicing for their Bullet Boys audition.â€ Using a delay while soloing? â€œâ€˜I thought â€˜Stranglehold‘ finally ended in 1975.â€

Only twice did I ever hear these guys completely refrain from any criticism upon hearing another guitar player: Eric Johnson’s â€œCliffs of Doverâ€, which they described as â€œbeautifulâ€, and Steve Vai’s â€œThe Audience is Listeningâ€ which earned the title of â€œclever.â€ I knew well enough not to ask them about the U2, Concrete Blonde or Sundays albums that I’d begun gravitating towards.

In this context, I totally get Yngwie Malmsteen’s snarky criticism of his peers from the famous 1994 Guitar World interview. I personally loved J. Mascis’s tortured delivery and aggressive leads, even as I knew that there were many people would think his singing resembled the moans of a recovering qualuude addict with a mouthful of marbles, and his playing something even worse. More often than not, the highly technical shred guitar players Yngwie called out kind of did have tone that â€œsounded like they have high output humbuckers and string action below the frets.â€ And knowing what Yngwie considered music, what else would they have expected him to say about Pearl Jam or The Cure?

Mike McCready of Pearl Jam was so proud of Yngwie’s distaste for his â€œwanky wah-wahâ€ playing that he subsequently wrote a letter to Guitar World to declare Yngwie’s â€œhatingâ€ his guitar playing the greatest compliment he had ever received. But if he was really so proud of his style of playing at that time, how come he hasn’t played remotely like that since? Could there be a chance that maybe, just maybe, when he listens to his lead playing on those early Pearl Jam records, heavy with distorted wah-wah and linear sixteenth note pentatonic runs, he might think â€œhmmm, that could have been a bit more tasteful, maybe I could have done something a bit more with thatâ€ even if the person criticizing him probably couldn’t?

I love Mike Campbell’s playing to death. Along with Luther Perkins and Scotty Moore, I consider him among the founders of what I call the Jewel Thief Approach to Lead Guitar™: get in, don’t make a mess of things, get out and leave an impression. But is his lead playing on â€œEven The Losersâ€ anywhere near his top twenty-five, even top fifty moments? It certainly isn’t â€œYou Got Luckyâ€, â€œRefugeeâ€ or â€œBreakdownâ€. Could Yngwie be just a *tiny* bit correct that there could have been more something more interesting for him to do than just repeating that Chuck Berry double stop?

None of us is infallible, especially not the young Yngwie Malmsteen, a hirsute Swedish guy in puffy pirate shirts with a Hans & Frans accent who once video recorded an instrumental called â€œArpeggios from Hellâ€ seemingly just to wave his fingers from overheating at the finish. At the time of this interview, Malmsteen had spent his career constructing an ornate glass castle from which he would fling stones.

It’s been especially amusing to see him grow older and even less humble, though I have reason to suspect from recent footage that he’s very much in on the joke. Agree or disagree with his opinions, his 1994 interview was a MRI of the id, the lizard brain of a musician during any moment when they have ever thought they could do it better. But if his detractors were right, if he was just some self-absorbed blowhard who thinks he’s the only musician in the world worth listening to, answer me this:

Why, in the middle of this interview where he’s just crapping on people left and right, did he love that Allman Brothers tune so much?

He surely didn’t do it for political cover or market favor. This was well before any kind of HORDE tour or career revival caught on for The Allman Brothers. Nobody was begging for tickets to see Dickey Betts or spending $1500 on eBay to buy the same overdrive pedal that Warren Haynes uses. And nobody would put The Allman Brothers in the same genre as Yngwie’s neo-classical shred.â€¨â€¨ I think Yngwie genuinely respected their attention to craft. Two guitars, in harmony, in tune. Check. The musicians playing interesting and melodic parts. Check. It was pretty. Check. The guitars had great, human, acoustically rich tones. Check. All in all, it reminds me of what my friend Teresa once described as her take on her favorite restaurants: â€œI like it. It’s good. We like it. It meets our standards.â€

I’m pretty certain that much of what Yngwie Malmsteen has written and recorded in his career would not meet what I consider my standards. So why should we fault him for having some of his own?

There’s a timeless light bulb joke about guitar players. The punchline goes like this: one to screw it in, and an infinite number to talk about how they would have done it better. In 1994, Yngwie told us all about the kind of meticulously crafted chair he would have stood on. Are you sure you don’t have one in mind of your own?