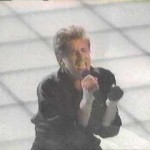 If I were to believe the 1980s could sonically, visually and aesthetically be summed up by Blade Runner, Vangelis, Blue Velvet, “Violator”, Nagel, “Moving Pictures”, Silence of the Lambs, Audi Quattros, “Master of Puppets”, Fandango, and I.M. Pei, I would be deeply, tragically mistaken. The 1980s can be distilled and consumed in one four minute and ten second music video: the title track to Don Johnson’s “Heartbeat”.

(One thing that Grantland’s “Rembert Explains the ’80s” segment on this video gets absolutely right: there is nothing quite like watching this video with a person who was not alive when this album came out. The comically beautiful thing about mediocre art is how dated it instantly feels. For a young person, there are no shortage of moments that aren’t completely mind-boggling.)

So why would I believe that this curious nugget captures the 1980s, rather than actually good music? I do not believe that the aesthetic of a decade is defined by its greatest works. Once you get past the certain aesthetic quibbles, great works in any era have the potential to be timeless. My sophomore English teacher assigned “Catcher in the Rye” to us and was completely unsurprised to find that over half of us had finished the book the next day. To a group of teenage boys in 1986, this contemporary novel written thirty five years earlier felt as vital and real to us as if it were written the day before.

To truly grasp the feel for an era, you have to examine examples of their commercially plausible mediocrity. My former bandmate Tim used to call Against All Odds the perfect 1980s movie. Jeff Bridges is playing an aging NFL player (The Dude, right?!? Playing football?!?) hired by creepy James Woods, wearing James Spader’s creepy white sport coat, to track down his missing girlfriend. Sex scenes, car chases, and other nonsenses ensue, punctuated by a first world understanding of Mayan cities and a surprisingly resilient Phil Collins soundtrack tune. None of the plots make any sense, but between the convertibles, suits, exotic locales, Rachel Ward, and professional football, it all seemed acceptable enough to gross what would have been a solid $50 million domestic take for an adult romantic thriller in current dollars. Even if it’s THE DUDE AS A WIDEOUT ON A PROFESSIONAL FOOTBALL TEAM. (And in the mid 1980s as well, decades before the rules changes that created a market for Danny Amendolas to run eight yard curls from the slot all day).

The video for “Heartbeat” operates along those same lines. There are mysterious revolutionaries who straddle some nefarious line between Zapatistas and a menacing BMX gang from an afterschool special. There are knuckle-less drummer gloves, Steinberger headless basses and Dweezil Zappa wearing a pastel colored, pointy Jackson Soloist guitar very high. The musicians perform with unplugged electric instruments on a stage that resembles a Rubik’s cube; the backup singers have borrowed black dresses from the singers on Pink Floyd’s “Momentary Lapse of Reason” Tour, and the sound is processed to outshine the gleaming city on the hill of Ronald Reagan’s America.

Bringing it all together is Don Johnson and his freakishly perfect stubble that sold a lot of Braun trimmers; only Mel Gibson in The Road Warrior has facial hair that remotely compares. While wearing something akin to a high-waisted version of MC Hammer’s genie pants with a belt that’s nearly a foot wide, he’s rocking out WAY harder than whatever that Richard Marx guy is going to do next year. He’s a photojournalist covering some protests, overseeing a fashion shoot, pursuing some bleeding heart white woman activist sympathizer who may or may not be token Baywatch brunette Alexandra Paul, and singing next to Dweezil in the white sport coat James Woods still hasn’t returned to Spader. When Johnson hurls a small child over a bunker, he’s showing that he’s both a man of action and a man of kindness; if this was a feature length film, you’d be certain that at least one casting director was still upset that they did not cast The Swayze.

Bob Ezrin once used cocaine to explain the bad musical decisions of the 1970s like Kiss’s “Music For the Elder”. “Heartbeat” (which by the way, was made into an entire feature length concept music video for the entire album, I kid you not) reeks of other 1980s excesses. There is a preposterous amount of star power contributing on the album: Tom Petty, Stevie Ray Vaughan, Barbra Streisand, Willie Nelson, Bonnie Raitt, Omar Hakim, and countless others. A single explosion in the “Heartbeat” video costs more than most product placement funded music videos today. Somebody had to gamble that Sonny Crockett from Miami Vice would make a successful album, and in those days when there still was money to be made in the music industry, a Top 10 Billboard single could really pay for an A&R man’s rent in Manhattan.

I’ll give credit where credit is due. The Dude was pretty fit in Against All Odds. And Don Johnson doesn’t hit all the notes, but he hits a lot more of them than most actors today would without a hefty dose of Antares Auto-Tune. When Don delivers a classic Truck Driver’s Gear Change for the last choruses, you can feel the same formula on the calculator from “Living on a Prayer” or “Take My Breath Away”, before the ’90s would arrive and somebody would turn down the reverb in the vocals, film with natural light, andÂ  repeatedly hit the MC, C and CE keys.